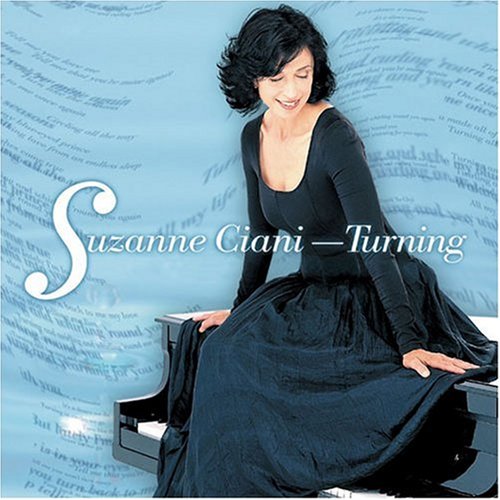 Turning is Grammy-nominated and Indie-nominated for Best New Age Album.

Vocalist Chyu-Yu leads off with the sole vocal piece, an Enyaesque plea for a lover to return, reprised instrumentally later in the set. Flute and horn duets serenade listeners sweetly through "Ocean Avenue," while "I Believe in Love" and "Soaring" are rhapsodized by flutes and oboes. "Midnight Rendezvous" bends the genres between New Age-classical and smooth jazz when Ciani's piano and synths meld with cello and sensual sax.

Inspired by her travels to Asia, Suzanne Ciani returns with her 11th release and a collection of lilting, sentimental originals. The title track, "Turning," is a catchy, ethereal piece somewhere between a Madonna ballad and an Enya song as sung by Chyi-Yu. The rest of the album uses mostly acoustic tools to create a fine fabric of lyrical music that's akin to Secret Garden and Jim Brickman. At times Ciani recalls the soul of the Paul Winter Consort with oboe, flute, and fretless bass daintily jamming in swirling trade winds of improvisation. Another enchantingly tender offering from this New Age master. --Karen Karleski

"Suzanne proves once again that she is the master of new age romanticism." --Tracks Across the Universe

"Beautifully balanced and conceived by Ciani and the array of longtime Windham Hill stars joining her..." --New Age Retailer

Suzanne Ciani is a composer, recording artist, and pioneer in the field of electronic music. She is best loved for her fifteen albums of original music that feature her performances in a broad array of expressions: pure electronic, solo piano, piano with orchestra, and piano with jazz ensemble. No matter the medium, Ciani's music communicates the special intimacy, passion, and sensitivity that have become her trademark and prompted fans to buy over a million of her albums.

Her music, renowned for its romantic, healing, and aesthetic qualities, has found a worldwide audience, and her performances include numerous benefits for humanitarian causes. She has toured throughout the United States, Italy, Spain, and Asia.

In the eighties and early nineties, Ciani's New York-based commercial production company, Ciani-Musica, Inc., was the leader in the field of sound design and TV spot scoring, creating award-winning music for a host of high profile Fortune 500 clients, including Coca-Cola, Merrill Lynch, ATamp;T, and General Electric. Additionally, Ciani has scored the Lily Tomlin feature The Incredible Shrinking Woman; the award-winning feature documentary, Mother Teresa; the feature documentary, Mother Teresa: The Legacy; as well as scoring for the TV daytime serial One Life to Live.

In the early nineties Ciani relocated to northern California to concentrate on her artistic career. In 1995, she established her own record label, Seventh Wave. After many years as an artist on major labels (Atlantic Finnadar, RCA RedSeal, Private Music/Windham Hill/BMG), Ciani felt the need to own and control her own creative work. Seventh Wave has remained an exemplar of the artist-friendly independent record label since then.

Ciani is a graduate of Wellesley College and holds a Masters in Music Composition from U.C. Berkeley.

This site uses cookies to deliver website functionality and analytics. If you would like to know more about the types of cookies we serve and how to change your cookie settings, please read our Eyelash for applying for Cosmetic Eyelashes Eyelashes Makeup Nat. By clicking the "I accept" button, you consent to the use of these cookies.

India vs Virus: voices from the COVID front line

What's it like battling COVID and providing healthcare and other support in India? Radio Davos hears from the 'social entrepreneurs' rising to the challenge.

14 lessons from entrepreneurs on starting your own business

Christine Lagarde on how to address COVID-19, climate change and inequality

What the world can do to solve the Afghan refugee crisis

Sustainability is the CFO's new best friend. Here's why

Cambodia's digital currency can show other central banks the way

Trust's role in the next big climate breakthrough: Yara’s Svein Tore Holsether on Meet The Leader

Engage with our Platforms

The World Economic Forum is the International Organization for Public-Private Cooperation.

These Blankets Are Keeping A Swiss Glacier From Melting

This glacier has shrunk considerably over recent decades and experts say by 2050 it will have vanished entirely.

The Spanish Donate More Organs For Transplant Than Anyone Else

Madagascar Is In The Grip Of A Climate-Change Induced Famine

Having Someone To Talk To Keeps Your Brain Young

Do we need humans for that job? Automation booms after COVID

India rising on global investment landscape. Get ready for a long equity rally

The World Economic Forum has published a new study on how artificial intelligence (AI) can be used to accelerate a more equitable energy transition and build trust for the technology throughout the industry.

What you need to know about the environment this week

30% of all tree species are at risk of extinction

A weekly update of what’s on the Global Agenda

Explore the forces driving change across more than 250 topics, curated by global experts, and identify the most relevant publications, videos, data, and much more

Fancy a career change? AI could help you decide your next move

Survey: How US employees feel about a full return to the workplace

UpLink is a digital platform to crowdsource innovations in an effort to accelerate the delivery of the UN Sustainable Development Goals (SDGs).

Remote working - does it make us more or less productive?

A universal COVID-19 vaccine could be closer than you think

COVID-19: What you need to know about the coronavirus pandemic on 6 September

COVID-19: What you need to know about the coronavirus pandemic on 3 September

Everything you need to know about the Mu COVID-19 variant

India vs Virus: voices from the COVID front line

What is the likelihood of another global pandemic like COVID-19?

COVID-19: What you need to know about the coronavirus pandemic on 2 September